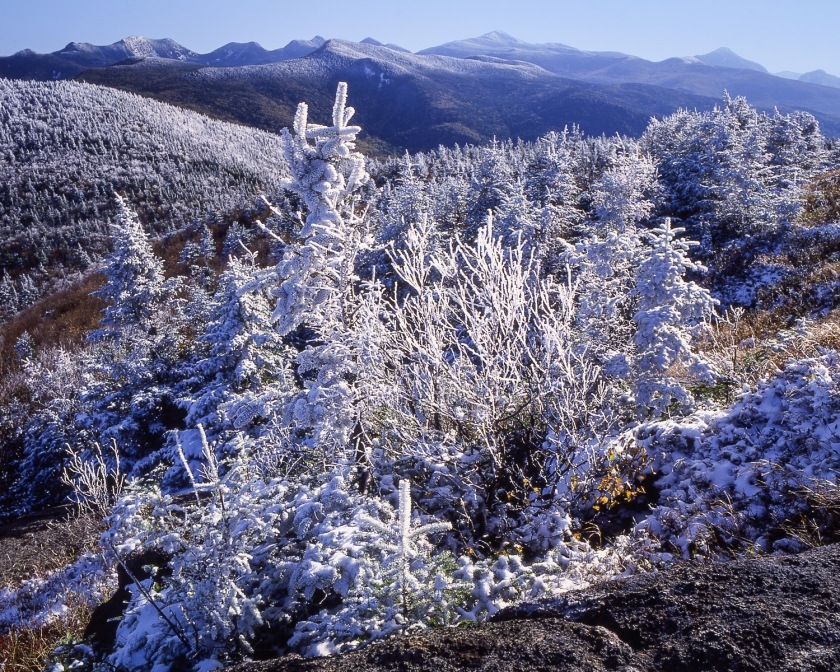 On my second trip to NY’s Adirondacks in 1992, I read about a hike up Cascade Mountain that offered the classic view of the High Peaks range and a 360º panorama. It made the list of shots I wanted, and I ended up making the climb on the day after one of cold rain. I saw that some of the mountaintops had been coated with the first snow of the season, but felt that most of it would probably melt during the course of the sunny day I made the climb. I gave myself plenty of time for the 2-1/2 hour climb to reach the summit in the afternoon, so I could spend time there and get some good late afternoon light. As I neared the top, I was encouraged to see the beginnings of snow, and as I reached the summit, all the weathered trees remained completely coated. Every needle of every evergreen was encapsulated in a white frosting of snow and hoar frost. It was like another world! It was my first experience atop a mountain for photography and made me realize just how exhilarating it could be, and why so many photographers aim for this kind of image.

There were a few things I recall about composing the image. First of course, was to have a view that allowed for the snow to be somewhat side lit to accentuate the contours and details of the trees, and give the scene depth. Second was to place all the trees in a somewhat balanced position within the frame, having the central cluster of a tree and bushes surrounded on either side by the singular smaller tree and mid-distance mountain top on the left side, balancing the trees on the right. And third, adjusting the height of the tripod so the very tip of the central tree fell in front of the darker areas of The High Peaks Range in the far distance. I do remember fine tuning the tripod position so that the tip of the small tree on the left fell inside the shadowed area of the mountainside far beyond so it too would be prominent and not lost in the chaos of the mountainside snow. With plenty of time to really explore the area, it was a luxury to get the composition just right. But it was also fortunate that several tree tops (5), both large and small, fell naturally where I would have wanted. Just another example of how nature grows and sculpts itself into beautiful shapes and forms.

A few minutes later, another photographer arrived and we talked while we shot and had a good time in the steady sunlight. I wasn’t comfortable staying there until after the sun went down and hiking in the dark, but may have had there been any clouds in the sky for sunset, and began to make my way back down to the car. By the time I reached it, it was dark, and I waited a while by the other photographer’s car in hopes of knowing he had gotten back safely. But, knowing he had done this before, I was confident he would and I headed for the nearest fast food burger place when hunger finally won out. 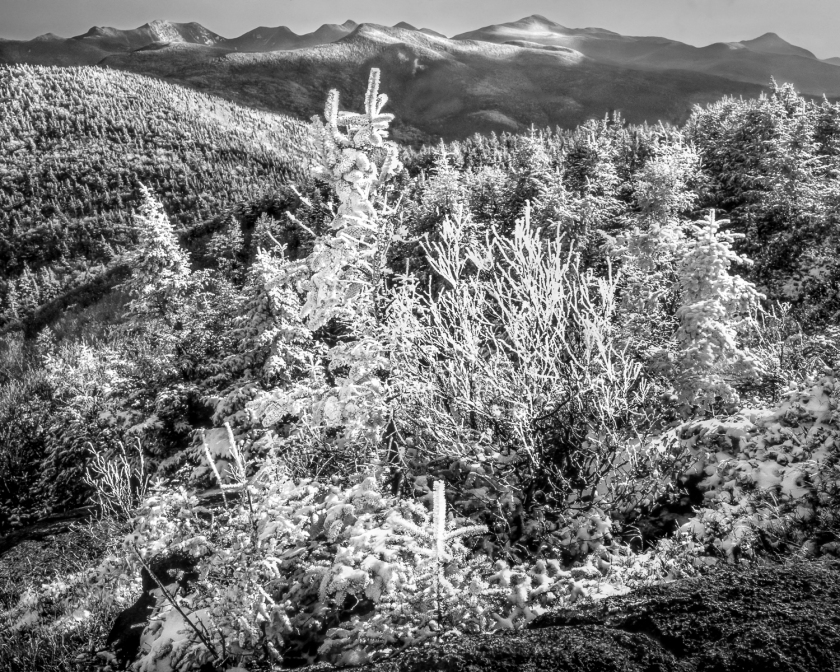 The following day, while driving near Lake Placid, I saw a car going in the opposite direction that was his car; there was no mistaking it since it had a plywood platform on a roof rack. I turned around and found it in a parking lot not far away, and caught up to him. We talked some again and agreed to meet in the evening at the same burger place after our day of photography. We ended up meeting there each night and once met up in the morning at Connery Pond for sunrise, all of which, made the second trip much more enjoyable than the first.

Years later, after switching over to digital, the photo from Cascade was transformed into a Black and White image. But it would take many attempts, over the course of several years, before it finally met the standards to be exhibited. It was this B+W photo that brought on a deep appreciation for those photographers who used the chemical, rather than the digital, darkroom. There were so many changes to light values made in the B+W version that I couldn’t imagine attempting it by dodging and burning the paper to get to where this photo was when it was completed. In those days, it was all done in hopes the calculations for the desired effect was correct, while digitally, what you see is what you get. Photographic progress!!