In early August of 1993, we were driving my daughter to a summer camp in northern New Jersey when I spotted a large field of purple flowers along the interstate with a solitary tree standing among them. The whole scene was backed by the edge of a forest that I thought would make a solid background to set off the tree. It was just a flash as I passed the spot at 65mph, but the mental image stayed with me, and I knew I would have to return to try to photograph it in the morning. The location figured to have some good side-lighting, so I was excited to about the prospects.

It was a cool, clear overnight, and after getting off the highway at the nearby exit, I parked the car on a side street. I hiked back up the exit ramp and along the highway about a half mile, to the only spot with a nearly clear view. As an added bonus, the cool air created some very light mist just above the marshy meadow for some extra mood, and I photographed it with highway traffic whizzing behind me a short distance away. I came away with some photos that I liked quite a bit, reminding me of a Monet painting.

Returning the following year on my day off from work to photograph what I had learned was an invasive plant called purple loosestrife, I was lucky to have the same weather conditions. But this year the flowers formed a different pattern that created a perfect leading line right to the tree. I brought along a step stool for a slightly higher vantage point over some reeds that caused problems the year earlier, and I took a few horizontal frames just before sunrise. But it wasn’t until the sun rose a little higher and the light raked across the meadow that the scene really came alive. I switched to a vertical to include some yellow grasses being lit in the foreground for the image at the top of the post. The sunlight gave the image much more dimensionality, with the grasses and flowers in shade and sun creating additional layers, while the background distant line of trees remained in shadow. 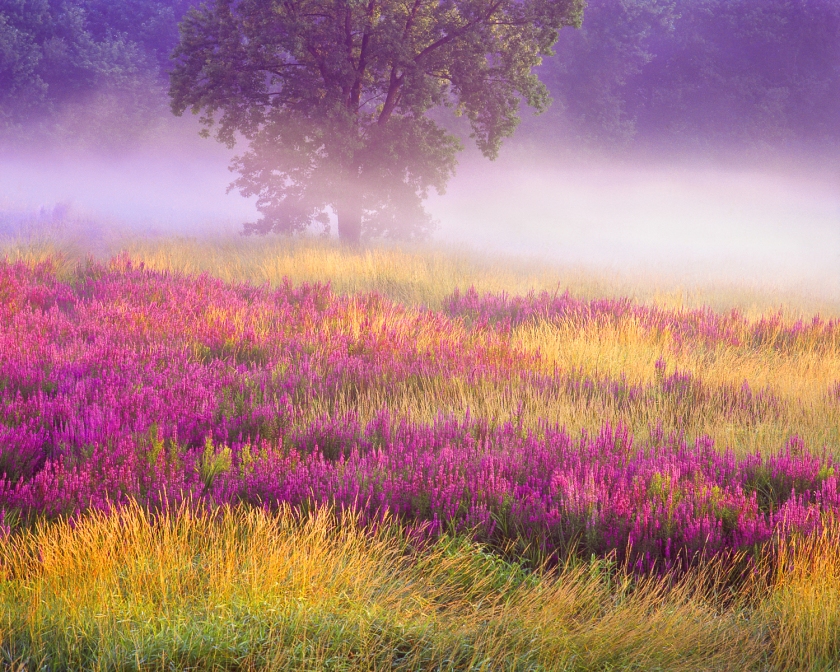 I returned a few years later to find that the pattern of the loosestrife had again changed, and I took a horizontal with quite a bit more fog and flowers. Even though the flowers, over the course of many years will completely engulf the meadow forcing birds to seek other areas for food, they did create a wonderfully beautiful design of color, mixed this year with yellow grasses instead of green.

The next year I returned again and was startled as I drove by on the highway toward the exit ramp, to see a completely different scene. The trees behind the solitary tree that provided the background were completely gone!! They had fallen to the marauding machines of “progress” having been bulldozed, leaving nothing for a background. The scene was gone.

Sometimes there is an advantage in returning to a location several times and getting to know the area well. Weather and conditions may vary, and just knowing how the light interacts with it can help in your choice on whether to go there on any particular day. For Troy Meadows, it seemed that a clear, cool morning produced the ground fog and a good interaction with morning sunlight. A late summer afternoon would not have any of the mist wafting through the meadow as it did in the morning, and of course, the light would be coming from the opposite direction which may have blocked the light on the tree itself. Unfortunately, all those considerations became irrevelant without the background woods.

On a day trip to the more natural areas just north of New York City, I came across another field of purple loosestrife that begged to be photographed. I saw a young beech tree that might be a good focal point for the shot, but from the roadside, its yellow, top leaves intersected the short band of yellow grasses and another tree further beyond, no matter how high I raised the tripod neck. The only solution to gain enough height to have a separation so the yellow leaves of the beech would fall against the darker purple of the loosestrife, was to climb up on the metal guardrails along the road, while placing the three tripod legs on one of the wooden supports. It wasn’t the most stable arrangement, for me or the tripod, but it was the only placement to achieve the separation needed. I did manage to take the usual three bracketed exposures before any injury to either myself, or the camera.