Baseball is a game of inches!! That’s something I’ve always heard when I used to play and watch games on television. A ball would go just beyond the reach of a fielder, a pitch would cross over just the slightest portion of home plate for a strike, or a fly ball would barely clear the fence for a home run. An inch either way would have produced a very different result.

Photography can also be a game of inches because just the slightest repositioning of your camera, whether hand-held or on a tripod, can make a world of difference in the visual rendering of a scene.

About three years ago, I was fortunate to tag along on a short photo excursion nearby to an abandoned elementary school. There were no attempts made to restrict entrance to the place, because all the entry doors were open and anyone could walk in and explore the effects of weather and the passage of time on the interior. Entering that school brought a rush of so many memories from my own time spent in eight different elementary schools, including three separate kindergartens, as our family traipsed across the country, following my father’s assignments to different naval bases.

Each of the rooms in the building had a character all its own. The library still contained books on the shelves, and microfilm strips strewn across the floor. Graffiti was on some of the walls and some rooms were nearly empty, while one was packed tightly with auditorium chairs in storage. It was that room that I spent quite a bit of time and ended up with two images I liked. The one at the top was an HDR, combining three images of differing exposure values that have since been lost because of a hard drive crash. Luckily, I still have the HDR. Recently, someone asked me about that image and while searching for it, I found the image below. I decided to process it from scratch and see where it went. The main difference in the perspective of the two seems to be the height at which the tripod was set, with the one below having a higher camera position than the one at the top; and it appears it was also moved a tiny bit to the right. As it turned out, I seem to prefer the vantage point a few inches higher from this second image much more, since there is better separation between the two tables on the left, and a better look down between the rows of chairs, adding to the feeling of depth through the scene. In the one at the top, the view doesn’t seem to reach very far through the image and seems flatter. I decided to accentuate the depth in the second one by having the oppositional cool and warm tones within it (cool tones recede while warmer tones advance), rather than the almost monochromatic theme of the one above.

I suppose each has its own merits, but I’m surprised that I didn’t even bother to process this second image to begin with. I guess another lesson to be learned is to revisit some old images that may prove to be worthy after a second or third look. It also illustrates that there is not a singular way to edit one particular image, but each image may have, depending on the choices you make in your editing process, differing final results in several aspects of the image. So try a few variations by simply making several copies of the original. 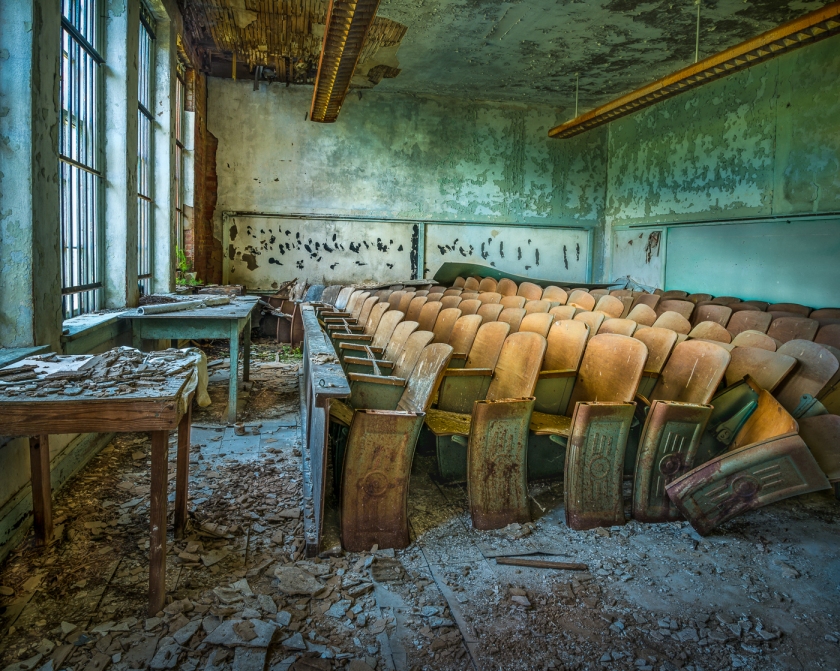 An additional image that day involved a two panel panorama using two horizontal frames. The first frame contained the word “Faith” painted on the wall to just above the chair rail, while the second frame included the chair rail and above, along a different section of wall that had peeling paint about twenty feet away from Faith. The wall above the graffiti didn’t have any peeling paint, and I thought, by combining the two frames later, it would better illustrate the feeling of the place, rather than what was physically there.

Quietly entering each room allowed me to listen to and absorb the stories left behind. In some, I understood them, yet in others, I was left with only unanswered questions. Why was so much time and effort expended to crowd these chairs into a room for which they were never intended? Why was there a couch in the library? And finally, did the painter simply record their own name or that of a friend? Or was Faith a simple, yet bold statement of something to have, or to keep?